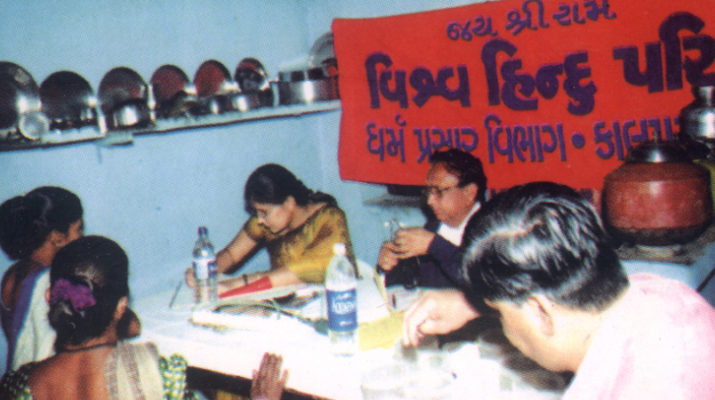 Untouchability is a curse on Hindu society. There is no greater sin than this in the present day of our democratic setup. Untouchability compels people to put barriers between man and man and never allows them to think in terms of oneness amongst Hindus as it keeps the so-called upper classes away from the weaker section of the Hindu society. V.H.P., which has been working for the oneness of the Hindus since its inception, therefore, decided to work for the removal of this curse from the society.

The First World Hindu Conference organised by the V.H.P. at Prayag in 1965 declared in a very clear tone that all Hindus are equals Since then the V.H.P. has been making sincere efforts to eradicate untouchability from the Hindu society through its various programmes like, Rath Yatras in backward, colonies, Pada Yatras of saints and sadhus in Harijan Basties, Community Meal Programmes (W” in Harijan localities, Temple construction in remote and backward areas and Training of Archaks and Pandits from amongst the weaker sections of the Hindu society.

Rath Yatras-Chariots with local deities had been on the move in Tamil Nadu, Orissa, Rajasthan, and Andhra in backward colonies. This has created a feeling amongst the dwellers that since God Himself has come to their doorstep, there remains no difference between lower and upper castes in Hindu society. Due to these Rath Yatras, a group of Harijans who had embraced Islam came back to Hinduism in Tamil Nadu. In the same way, several thousands of converted Vanvasis came back to Hindu fold in Orissa and Rajasthan.

Pada Yatras-Prominent Dharmacharyas including Jagatguru Madhwacharya Swami Vishwesh Tirthji, H.H. Satyamitranandji, and others took Pada Yatras in Harijan colonies and preached that untouchability was non-religious and hence they were all equals. This created a feeling of confidence amongst them that they have been accepted as an integral part of the Hindu society. Not only this, Jagatguru Shankaracharya of Jyotish Peeth Swami Vasudevanandji, Jagatguru Ramanandacharya Swami Rambhadracharyaji, Jagatguru Madhwacharya Swami Vishwesh Tirthji along with other saints and sadhus visited Dr. Ambedkar’s Diksha Bhoomi at the time of the Kendriya Margdarshak Mandal meeting held at Nagpur in October 1993 and offered Pushpanjali to the great son of India, the Adhunik Manu. Thousands of Harijans, gathered there, had tears of joy to see these holy men there.

Common Meals– Common meal programs are arranged from time to time at various places in different states in which all Hindus irrespective of caste, creed or community participation. A mass meal program was arranged recently at Ghorawal in U.P., in which 20,000 Tribals took part along with prominent businessmen and pandits are drawn from the Varanasi area. At the time of special session of Sixth Dharma Sansad held at Varanasi in March 1994, a common meal program was arranged by the Domraja of Varanasi in his house at Dashaswamedha Ghat in which Mahant Avaidyanathji, Mahant Nritya Gopal Dassji and a large number of sadhus and saints along with Shri Ashok Singhal, Acharya Giriraj Kishore and other office bearers of V.H.P. participate.

Temple Construction – Near about 300 temples have been constructed in backward areas of Tamil Nadu, Rajasthan, South Bihar, and Andhra Pradesh to facilitate the poojan-archan work for the downtrodden. The first-ever Naga temple was built up by the V.H.P. in Assam.

Due to these programs, a feeling of social equality has been generated to a great extent.