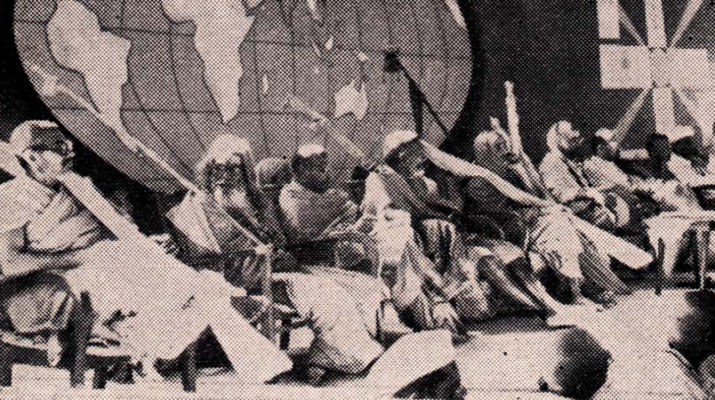 Vishva Hindu Parishad has refreshed the memories of Prayag Sammelan organised by Emperor Harshavardhan several centuries ago, by holding this first Vishwa Hindu Sammelan on the auspicious occasion of Maha Kumbh Mela on Mauni Amavasya (new-moon day) [22, 23 and 24 January 1966] at Prayag.

As a result of untiring efforts of Pujaniya Shri. Guruji, the Dharmacharyas, Sadhu-Sants, etc. of various sects-creeds of Hindu society including all the four Shankaracharyas came on one platform.

The Sammelan had a living accommodation for 25,000 delegates and the main pandal had a sitting capacity of 50,000 delegates. About 75,000 delegates took part in the deliberations of the Sammelan in the pandal. Of them, about 12,000 delegates used to remain in their respective townships only. The ideology, methodology, and mission of the Parishad came to light through this Sammelan before the Hindu society for the first time.

The main activities of the Sammelan were as follows :

The Sammelan began with the auspicious chorus of The Parishad Song
Vishwamakhilm-uddhartumami Nirmita Vayam….. (Almighty Lord has given us birth to redeem the entire universe…) After the Mangalacharan, all the Dharmacharyas adorning the dias of the pandal sang the traditional prayers of their respective creeds-sects, etc. and gave their blessings for the success of the Sammelan. Thereafter various expert Pandits of different Vedic branches recited the Richas from Rigved, Shukla and Krishna Yajurved, Samaveda and Atharvaved in their purest form.

On this occasion, the Dharmaguru and the President of Tibet (in exile) Dalai Lama wrote, Hindu Dharma is more ancient and eternal than many other religions of the world. Its philosophy is extremely rich. Hence, the followers of Hindu Dharma should remain active always to protect their Hindu Dharma and contribute their mite adequately.

While blessing the Sammelan, Jagadguru Shankaracharya of Dwaraka Peeth said, We have decided to come together at this anxious historic moment. This is the most critical juncture in the annals of Hindu Dharma, which we have to face boldly. It is also an important development that we are coming together under the banner of Vishva Hindu Parishad so that we can forge ahead to establish unity amongst all the Hindus of the world.

On this occasion, the following message of greetings from the King of Nepal was read out aloud by Shri. Rudraraj Pandey, Vice-Chancellor of Tribhuvan University, Nepal. If the Vishva Hindu Parishad could resolve the greatest problem of world peace through peaceful and cultural resources, then it would be an undeniable gift itself. Keeping this in view, we all the Nepalis welcome this Sammelan. Undoubtedly, it would be a very great achievement for entire Hindu lot, if the unity of all the Pandits, Yogis and great intellectuals gathered here in this Hindu Sammelan is able to guide in a modern way for the scientific investigations of all the matters for uplifting the peoples standard of living on the basis of our ideals and models. This Dharma has come down to us absolutely unaffected, in spite of the greatest upheavals in the world; because of high thinking, liberalism and the spirit of ˜Satyam, Shivam, Sundaram (truth, wellbeing, and beauty) are throbbing in us.

At the outset, Mayor Shri Shyamanath Kakkad welcomed all Sadhu- Sants, peoples representatives and delegates attending the Prayag Sammelan and said, The Sammelan is a historic occasion and an unprecedented effort to revive a broken tradition….

While inaugurating the Sammelan, H. E. Governor of Uttar Pradesh Shri. Vishwanath Das said the imperative need of our times is to revive the greater influence of Hindu culture. We are grateful to the State of Nepal, as its delegation has enhanced the sheen of this Sammelan. The Governor appealed to the Vishva Hindu Parishad to organise all Hindus, wherever they may be living in the world and enlist maximum co-operation for the resurgence of Bharatiya culture there through.

While releasing the special issue of ˜Vishwa Hindu, H. E. Governor of Bihar Shri. Anantshayanam Ayyangar spoke in Hindi and appreciated the aims and objects of the Parishad and said, Hindu Dharma had reached nooks and corners of the world much before the advent of Islam and Christianity. Shri Ayyangar regretted Faith of the modern youths about the Hindu Dharma is on the wane. And these efforts of the part of the Parishad are really appreciable. He further said, If the Hindu ideals and values are accepted by mankind at large, it would go a long way in establishing world peace. The entire world is afflicted with countless crises now. The danger of war looming large over humanity could be averted only if we adopt the ideals of Hindu Dharma.

While speaking on the occasion, the former Prime Minister of Nepal Dr. Tulsi Giri said, Only Hindu Dharma can give us strength for establishing international peace and status for motherhood, while safeguarding the diversity of the ideals.

Prior to the commencement of the formal proceedings of the Sammelan, the then General Secretary of the Vishva Hindu Parishad Shri Dadasaheb Apte presented his report. Thereafter the Hindu delegates from the foreign countries were felicitated.

A proposal was presented in the Sammelan for preparing a comprehensive ˜Code of Conduct for all the Hindus with a view to establishing ˜unity in diversity amid Hindu society. Sant Tukadoji Maharaj emphasized the need for a new Code of Conduct in the context of modern times.

The Jagadguru of Puri cited various lucid examples to stress the imperative need of resolutely meeting the conspiracies of Christians.

In his own inimitable and enthusing address, Swami Vishveshtirth said, Today the world belongs only to the strong. There are a number of crises in the world. Under the circumstances, we, not only wish to live but also come out of them triumphantly. We shall have to shoulder proper responsibilities for usher-ing in peace and prosperity in the future. Our Hindu Dharma is capable of bestowing necessary inspiration and strength on us.

Let us all wholeheartedly co-operate with the VHP in all the programmes decided upon by it for us. It is essential that a Vidwat Parishad is formed for preparing a Common Code of Conduct for the Hindus with a view to bringing harmony between our traditional ideals and present-day needs. There is equally a need for a Central Vidyalaya to train up the teachers for the propagation of Hindu Dharma. It is also necessary to establish educational and social service projects on a widest possible scale. So that the message of our Dharma can actively reach to the down-trodden, poor, wretched, innocent, gullible common Hindus. It is the bounden duty of every Hindu to co-operate in this most sacred duty of ours he concluded.

Various Sants, thinkers and important Office-Bearers of the Parishad delivered inspiring and enlightening speeches. Some important speeches are given below :

The Founder President of the Vishva Hindu Parishad Swami Chinmayanand said This is an astounding Sammelan. But convening a Sammelan or starting an organisation is not enough. The real work has begun just now. All the Acharyas have given their full-throated blessings to our activities.

Sant Tukadoji Maharaj bemoaned to say, It is regrettably true that the Dharmic sway is on the wane in Bharat, in spite of the presence of intelligent Jagadgurus, great Sants and Dharmagurus well-versed in the Dharma-Marma (most confidential essence of Dharma). We can not blame others for this state of affairs. We have to blame our own selves. Because the responsibility of protecting Dharma is squarely on our shoulders. He further said It is extremely gratifying to note that the VHP is going to realise those very ideas and ideals, the inspiration on the basis of which Bharat Sadhu Samaj was established long ago.

In his effective lecture, the chairman of the Sammelan Shri. Ramaprasad Mukherjee hoped, Now that the Sammelan has come to an end. But the actual work of the Parishad has just begun.

There were moments in the Sammelan, when one felt like the entire proceedings of the Sammelan going to be topsy-turvied on account of some difference of opinions between the Sadhu-Sant, Dharmacharyas-Dharmagurus on several issues. But Shri. Guruji with his humble nature and mature ideological acumen could succeed to keep all the Dharmacharyas together and all the proceedings of the Sammelan could culminate in successful consummation without any obstacles.

Resolutions passed at the sammelan:

In all, 11 resolutions were passed in the Sammelan. The essence of certain main resolutions is as follows :

An important resolution was passed in the Sammelan regarding those Hindu brethren, who have forsaken their Dharma due to ignorance. It is very clearly mentioned in the resolution, ˜It has become all the more essential that any individual, who is prepared to return to his/her Swadharma (Dharma of his/her ancestors) willingly without any duress, he/she should be welcomed and assimilated.

* Glory of the Temples

One more resolution was passed in the Sammelan, whereby all the administrators and the trustees of the temples, Mutts, and Ashramas were requested to make immediate efforts to reestablish the real significance of these places by effecting necessary modifications in these sacred places with the co-operation of the common masses and to reform them. They have been the protective centers of our Dharma and culture for centuries. But due to certain incidental circumstances, some of them have lost their prestige and usefulness since some time past. Hence their ancient glory and social standing be restored once again to make them the centers of social reforms.

Not only during our slavery but also in the independent Bharat, cow slaughter has been going on unabated on a very large scale. Hence this Sammelan prevails upon the Government to pass a central enactment banning the cow slaughter in entire Bharat without any further delay by adequately respecting the religious feelings of the Hindus.

Sanskrit Bhasha is not merely a most ancient of languages, but it is a carrier of Sanskriti of Bharat also. The entire gamut of science and knowledge has been finding expression soon only through this language. Hence this Sammelan passed a resolution and enjoined there to Govt. to expand the facilities of teaching Sanskrit Bhasha inside and outside the country to strengthen the unity among the Hindus spread all over the world; so that the Hindus living abroad may take advantage of their Dharmic and cultural knowledge freely

The Hindus living in foreign countries are getting alienated from their original land and Dharma gradually. Similarly, they are getting cut-off from their traditional Dharmic, social, cultural Sanskars also.