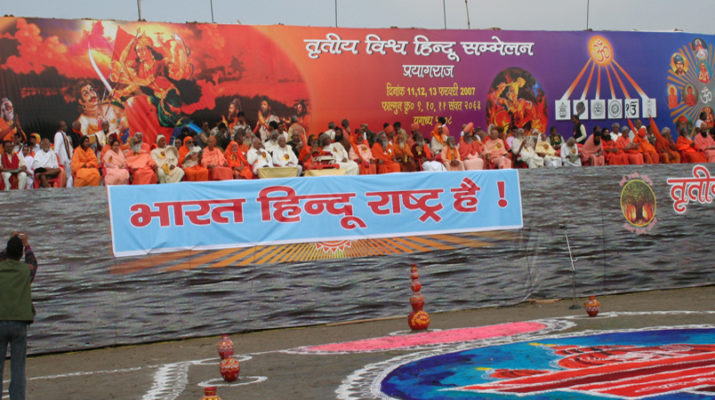 The Historical 3rd World Hindu Sammelan was conducted under the auspices of VHP from 11th to 13th February 2007 at Prayagraj, Utter Pradesh on the banks of holy Ganga, a little distance from the Triveni Sangam of Ganga, Yamuna & Saraswati. To device ways and means of powerful Hindu organisation to surmount the challenges faced by the Hindu Society- these were the major concerns of Pujya Saints as well as the participants of this historic congregation. Despite natural calamities, the WHC was a success.

Continuous and unprecedented 18 hrs of torrential rains had put a big question mark on the successful conduct of the WHC. Total residential arrangements of 15000 tents made on 350 acres of area on the banks of Ganga had collapsed. Over 2 lakh representatives had to leave the venue of WHC and move to Prayag city.

So, it was truly a divine inspiration and divine intervention only that all the arrangements of these 2 lakh people could be made on a sudden notice by the middle of the night on 11th Feb.

Schools, colleges, dharmashalas, private homes were arranged at moments notice and everybody was accommodated. Food arrangements were made immediately. Due to rain and bitter cold, the needed medical arrangements were also provided. Bhajan-kirtan was going on everywhere. With divine inspiration and help, the people of Prayagraj took good care of all the representatives.

Despite this calamity, on the 12th of Feb morning, all the participants who had come from all the Prakhands from all over the Bharat, resolved to come together at the venue of the WHC on the banks of Ganga.

A grand Shriram temple will be built on the Shri Ramjanamabhoomi at the same spot where Pujya Shri Ramlala is situated today. The temple will be built by cooperation of both the Shri Ramjanmabhoomi trust as well as Shri Ramanand Sampradaya. No masjid will be created within Cultural (Sanskritik) boundary of Ayodhya as indicated in the shastras. Also no masjid in the name of Babur, the foreign Muslim invader, will be allowed to be built any where in Bharat. If anybody creates any obstacles in the construction of the Shri Ramjananmbhoomi temple, Hindu society is ready for the final battle to win it and construct Shri Ramjanambhoomi mandir.

Since time immemorial, Bharat is a Hindu Rashtra on the bedrock of Hindu culture and eternal Hindu values. Bharat is the country of Hindus.

Hindu society is past, present and also the future of Bharat. To create an Akhand (united) Bharat and for the total protection of Bharat, to bring Golden glory to the Bharat, it is necessary to develop a powerful Hindu vote bank.

Untouchability is a social evil. With a firm resolve, Hindu society should get rid of it. In Hindu Dharma there is no scriptural sanction for untouchability. ‘ Atmavat Sarva Bhuteshu’ is the basic tenet of Hindu Dharma and thinking. We believe that temples should be open for ‘ darshan’ to every Hindu of every community. As children of one Bharatmata, all Hindus are one family.

4. Hindutva is the basis of Hindu Rashtra

The meaning of the Hindu Rashtra should be understood from a broader perspective of a true feeling of wellbeing for everybody, on the basis of ‘Atmavat Sarva Bhuteshu’- (the same spark of ‘Chaitanya’- consciousness- permeates all things in existence) and a vision for building a whole world that lives like a family that is thriving in peace, happiness and a feeling of complete harmony. Hindu Rashtra is a true basis for such a world vision.

5. All Hindus Should Unite

An organised Hindu society is the need of the hour. Hindu Unity is an imperative because of the unscrupulous Western cultural aggression tearing apart our age old cultural fabric, rampant religious conversions of Hindus done by the Christian Church, the dangerously changing demographic pattern of the country due to unchecked and massive Bangladeshi Muslim infiltration, the politically instigated caste divides and clashes, the increasing danger of violent Islamic terrorism. This WHC III gives a clarion call for an all-encompassing Hindu Unity rising above all varieties of caste, sampradaya, languages and prants.

As part of the WHC III, Many other International Conferences

A) To do ‘Abhisheka’ of Bhagvan Shivji in their respective villages or towns with the holy ‘Ganga jal’ from ‘Prayagraj’ and take an oath to re-establish the Hindu Rashtra.

B) On 19th March 2007, ‘Hindu Nav Varsha’, (New Year) all Hindu homes should be adorned with Saffron flags.

C) From Varsha Pratipada to Ramnavami, to celebrate Ram Mahotsav. To this effect 42000 ‘vigraha’ were distributed in WHC III.

Pujya Shri Satyamitranandgiri Maharaj Ji gave a holy pledge to all those present in the congregation- to re-establish the Hindu Rashtra, to do consistent and successful efforts to build Shri Ramjanmabhoomi temple at Ayodhya; Shri Krishna Janmabhoomi temple at Mathura; the Kashi Vishwanath temple; to protect Ganga; Gau vansh( cow & its progeny ) and Tulsi, to free the Hindu society of the social evil of untouchability, and to create appropriate atmosphere to bring back crores of people who had left their original Hindu Dharma for one reason or the other in the past.

The answer to the Islamic jehad is Dharmayuddha!

No Hindu is untouchable. Hindu Dharma does not sanction untouchability and any form of discrimination

We have been soft like a flower in our dealings up till now. But we will have to become hard as rock now. Hindu society should be organised to protect our Hindu Dharma.

The holy Ganga must be protected at all costs

To stop religious conversions of Hindus, all Hindus should work according to a strategy. By following the path of Dharma, Dharma to be protected.

To have tremendous devotion towards Sanskrit language and Bharat, becauseBharat is the land of wisdom and a holy land… to understand the essence of life, one must study Sanskrit.

Sanskrit should made a Rashtriya Sampark language

” Bharat will definitely become  Akhand’ soon in near future”

“Bharat is our Mother.”