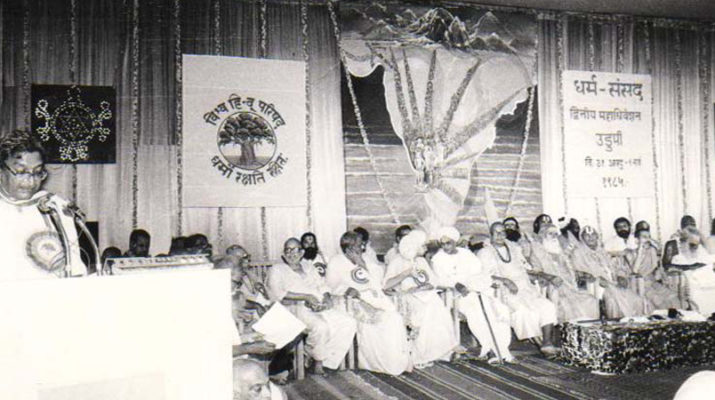 It was convened in Udupi (Karnataka) on 31 October and 01 November 1985. Its inaugural session was presided over by Jagadguru Madhwacharya Pujya Swami Vishweshtirth Maharaj. The key-note address was delivered by Brahmalin Sant Pujya Swami Chinmayanand Maharaj, Sandipani Sadhanalaya, Mumbai. More than 851 Saints and Dharmacharyas hailing from the whole country participated in this Sansad.

While re-iterating the resolve to make the Hindu society vibrant, strong and powerful; and extending full support to the issue of temple construction on Shriram Janmabhumi, it was decided that if the lock placed on the Shriram temple is not removed by ensuing Shivaratri, a country-wide movement would be undertaken. A Committee comprising of 34 Dharmacharyas from all the provinces for the direction of Shriram Janmabhumi Mukti Andolan was formed.