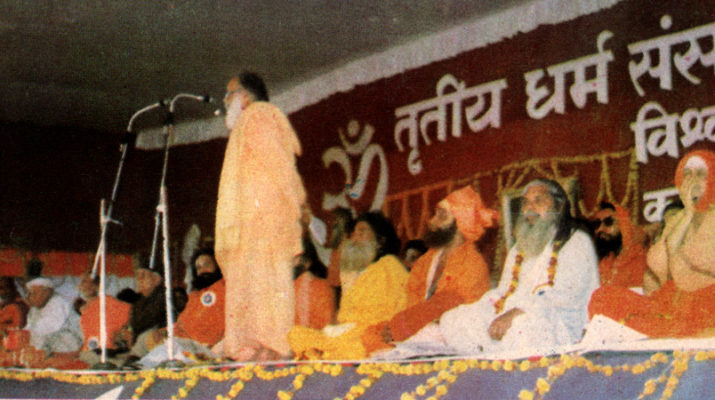 This was convened in Prayag on the occasion of Maha-Kumbh [29-30-31 January1989]. The inaugural session was presided over by Jagadguru Pujya Swami Shankaracharya Jayendra Saraswati of Kanch Kamkoti Peeth. The introductory speech was delivered by the then Secretary General of V.H.P. Shri.Ashok Singhal. About 3,000 Saint-Mahants, Dharmacharyas, and Dharmagurus from all over the country participated. Late Shri. Omkar Bhushan Goswami, Convener, Kendriya Margadarshak Mandal anchored the proceedings of the Sansad.

Along with the announcement of 5-point Do and Dont for the purpose of re-establishment of Bharat as Hindu Rashtra, the model design of Shriram Mandir was also accepted with a view to pre-empt the disintegration of the Hindu society. Similarly together with the orders for taking the issue of Ayodhya out of Uttar Pradesh and make it country-wide; and receiving one Shriram Shila worshipped in every village in the country with a Dakshina of Re.1.25 from each Hindu,Date and venue of Shilannyas of Shriram Janma-bhumi Mandir was also announced.

5-point Do and Don’t

Do :– Hindu Satva Jagaran (Awakening of Hindu Self identity).

Don’t :– Repudiation of a selfish life.

Public awakening for redemption from the crisis befalling on the self-oblivious Hindu society and its religious and cultural ideals.

* Well-planned Chatur-Mas by Saints, Dharmacharyas in all districts in the country.
* Plannned Padayatras by adopping the districts by Saints, Dharmacharyas after the Chatur-Mas.
* Pravachans for re-establishment of Hindu nation by the Saints, Dharmacharyas in Tirth-Kshetras and on Parvas.
* Lectures by Dharmacharyas in the temples, schools, scarcity-prone areas and other public places.
* Guide-lines to the society by the top-most leaders of social, religious and community organisations.
* Enhancing the knowledge of society through modern broadcasting media like video, exhibitions etc. and publicity-propagation literatures.
* Hoisting of saffron flags, a symbol of Hindu nation, atop houses of all Hindu families, temples and religious places in all the cities, villages, and Vananchals from Varsh Pratipada to Ram-Navami every year.

Don’t :– Repudiation of the evils like high-born, low-born, untoucheability and divisive tendencies.

* Formation of Margadarshak Mandals in every district for co-ordination and cordiality between different Panthas and Sampradayas.
* Installation of Sanskrit language on its earlier glorious place for unifying different languages, peoples and creating goodwill among them.
* Arranging public welfare programs in the cities, villages, and Vananchalas on a wider scale for removing social, educational, economical and Panth-based disparities.
* Co-operating in securing assistance being offered by G.O.s and N.G.O.s
* Quick solution by Dharmacharyas immediately on the receipt of the news of caste conflict.
* Collective efforts by Dharmacharyas, youths and affluent persons for the eradication of the feelings of high-low, untouchability at public place and development of temples and religious places for organising entire Hindu society.
* Appropriate arrangements of eligible Archakas, Pravachankars, Kathakars, Bhajan-Kirtankars for purifying the atmosphere in temples and religious places.
* Massive observance of Tirthas, Parvas, Festivals and Birth-days of great personalities.

Don’t :– Repudiation of social evils like dowry and corruption.

Establishing Susanskar [behavioral refinement] and Sadacharan (good conduct) in the society including children and youths for maintaining familial, social and national ideals in Hindu society.

* Propagation of dowry eradication among young boys and girls.
* Imparting education of character and good conduct by the mother and conduction of Bal Sanskar Kendras by them in the Mohallas.
* Religious education and study of Dharmic Scriptures to ensure physical, intellectual and spiritual fortification among the youths through the schools for national resurgence.
* Sanskar Jagaran through the Satsangh, Kathas, and Pravachans by Dharmacharyas in the temples and religious places and physical exercises through the Akhadas (Gymnasiums) for the youths.
* Efforts on large scale for the development of cows and their progeny, service to cows and devotion to cows in the families.
* Propagation and practice of Swadeshi (indigenisation) in the whole nation.
* Emphasis on Ashram Dharma, re-establishment of Vanprasthi tradition and inspiration to life dedication for social service.
* Insistence for donating 10% of the income to Hindu Relief Corpus-Fund for social welfare works.
* Various programs for awakening Sanskars among the foreign-based Hindus.

Do :- Protection of Hindu.

Don’t :– Repudiation of indifference towards assaults on the Hindu articles of faith and honour by the adherents of alien religions.

Preparedness for the protection of society by dispelling indifference towards the assaults on the articles of faith and honour like cows, temples, prevention of conversion and illegal infiltration in the country.

* Use of force for prevention of cow slaughter.
* Powerful collective efforts for preventing the conversion of Hindus.
* Continuous efforts to bring the converted Hindus back into the Dharma of their ancestors.
* Struggle for preventing illegal infiltration from foreign states and ensuring their deportation.
* Planning the strategy against regular attacks by the followers of alien faiths on Hindu temples, points of faith and honour, and religious congregations.
* Powerful protests against the efforts of creating illusions about Hindu Dharma, society and culture through television, cinemas and other media; and regulation of naked and blatant materialistic civilization of the west.
* Foiling the efforts to re-partition or disintegration of Hindu society and our country Bharat.
* Create public awareness about reducing the percentage of Hindu Population every year and make all possible efforts to raise this percentage.

Don’t :– Repudiation of corruption, alienation, and separatisation of Hindu society through politics.

Awakening of social consciousness for electing people of good character with a national outlook by ending the corrupt politics that is being practiced on the basis of caste, creed, language, region, etc.

* Hindu society should elect only such individuals for the Parliament and Assemblies, who are committed to the just interests of Hindus.
* Elect only such individuals with high moral character, who rise above casteism, sectarianism, linguism, and regionalism.
* Political leadership of the country is entrusted to such individuals, who are competent to decide the policies on the basis of sublime values of Hindu Dharma and culture.
* Society should be aware of those politicians, who indulge in the appeasement of the minorities and support the demands of anti-national elements for fulfilling their own individual selfishness and party interest.
* The politicians should the following just interests of the Hindus in their election manifestoes and the Hindu society should unitedly oppose all those, who do not include them.
o Return of Shriram Janmabhumi, Shrikrishna Janmasthan and Kashi Vishwanath to Hindus.
o Deportation of the Bangladeshi and Pakistani Muslims and concrete action for the effective prevention of their infiltrations.
o Ban on foreign money coming in the name of aid but which is actually used for conversion.
o A legal ban on the conversion of Hindus.
o Common Civil Law for an entire country in accordance with Bharatiya traditions.
o Bestowing upon the Hindus all the special prerogatives that are provided to minorities under Section-29 and 30 of the Constitution.
o Abrogation of special status granted to the states under Article-370 and 371.
o Passing a law for the prevention of cow slaughter.
o Ending discriminatory acquisition of Hindu Mandirs and religious places.
o Making the teaching of Sanskrit Language and Yoga compulsory in school education policy along with spiritual and moral education.

The following nine resolutions were passed amid the tumultuous voice :

01.  Allahabad should be re-named as Prayag.

02. Akshaya Vat (immortal banyan tree) be opened up for public for Darshan-Pujan-Archan and living arrangements be provided in the area of Akshaya Vat for the pilgrims of Kumbh.

03. Saffron flags are fluttered ceremoniously atop all houses, temples and religious places during Navaratri.

04. Saint Shakti should come forward for protecting the Samaj in fighting that goes on in the name of the language, Panth, caste, etc.

05. Management of the Hindu temples should necessarily be done through Autonomous Religious Boards and all the incomes of temples should be spent on religious activities only.

06. The instances of atrocities on Hindus anywhere in the world should be brought to the notice of UNO and a Vigilance Squad be formed under the aegis of UNO that would control injustice meted out to Hindus in various parts of the world.

07. Such representatives with good character and spotless conduct alone should be sent to the Parliament and Assemblies, who would include the programs of protection of Hindu interests in their election manifestoes.

08. One Shriram Shila (worshipped brick) be invited from each village and mohallas in the towns in the country for the construction of Shriram Mandir in Ayodhya with a donation of Re.1.25 from each Hindu for the same purpose.

09. A Hindu Mandir Jeernoddhar Nyas be formed for making efforts to construct new temples in the backward areas and renovate the dilapidated temples in the villages.

Millions of pictures of the model design of Shriram Mandir at Ayodhya as accepted in the benign presence of Brahmarshi Pujya Devraha Baba were distributed and propagated among the common masses. Besides, Shriram Shila Pujan programs were performed in over 2.75 villages and they were sent to Ayodhya. Shilannyas was performed at the scheduled place, date and time on 9-10 November 1989 with great aplomb and enthusiasm in the presence of journalists from all over the world.

With a view to acquaint all the people present in the Melas, Yatras about each and every proceedings of the Dharma Sansad, over 1,500 loud-speakers connections were fixed throughout the length and breadth of the Kumbh Mela. As a result of this, the millions of Sadhu-Saints present on the occasion of the Maha-Kumbh in Prayag could directly secure information about the entire proceedings of Dharma Sansad from the place wherever they were put up.