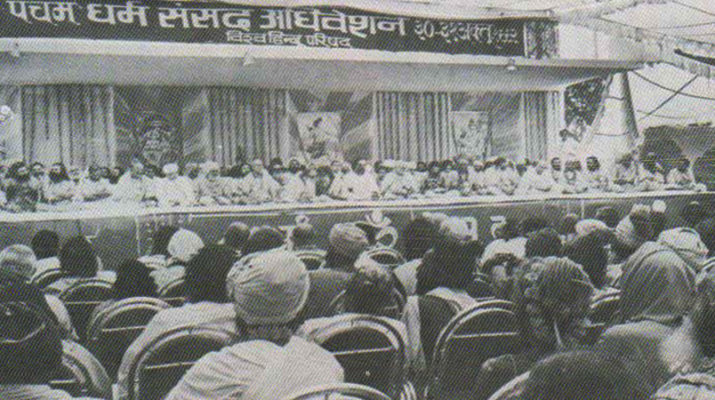 This was convened in Rani Jhansi Stadium, Keshavapuram, Delhi on 30-31 October 1992. Jagadguru Shankaracharya Swamy Vasudevananda Saraswati Maharaj presided over the inaugural session. Shri Ashok Singhal, the then Secretary-General of VHP delivered the introductory speech. About 5,000 Sants participated in this Dharma Sansad. Acharya Ramanath Suman, Convener, Kendriya Margadarshak Mandal anchored the proceedings. Shri. Raghunandan Prasad Sharma took down the notes of the proceedings and published the same in a book form later on.

It was decided to begin the continuous Karsewa for the construction of Shriram Mandir at Ayodhya from 06 December 1992.

A following nine resolutions were passed :

As a result of non-stop Karsewa began on 06 December 1992, the structure that was built 468 years back was reduced to dust on that very day. The entire country celebrated Deepavali with full delight and joy.