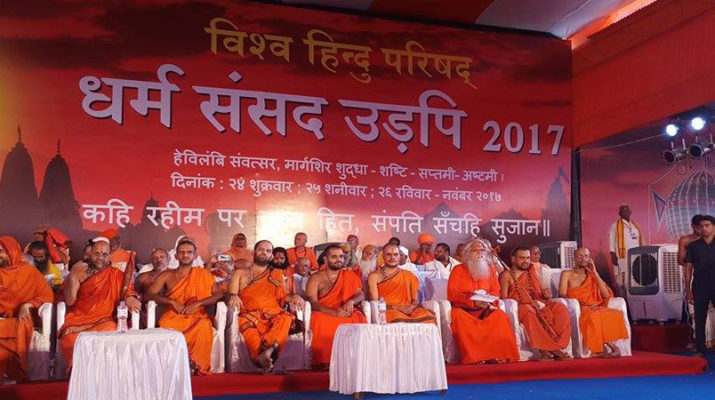 This session was held in an attractive and majestic pandal on the Ramlila Maidan Delhi on 22-23 February 2003 under the chairmanship of the President of Shriram Janmabhumi Mandir Andolan High Power Committee Goraksh Peethadhishwar Pujya Mahant Avaidyanath Maharaj. Key-Note Address was delivered by Shri. Ashok Singhal. The Session was inaugurated by lighting a lamp at the benign hands of Yug-Purush Swami Paramanand Maharaj. About 9,000 Sant-Mahatmas, Dharmacharyas from all over the country participated in this Sansad.

While expressing its firm resolve to re-establish a fully sovereign, invincible, courageous,competent, strong, flourishing, rich, unaggressive, universe-loving, Dharma-oriented, cultured and self-respective Hindu Rashtra (nation) in this Akhand (unified) Bharat for preventing the woeful condition of its own Hindu society and its great religious and cultural identity in its own mother-land, father-land and holy-land; the Dharma Sansad respectfully and humbly appealed the corporeal Hindu Samaj comprising of all the adherents of Bharat-originated philosophies, modes of worship, Mata-Panth-Sampradayas and its guiding Acharyas, Gurus and Sants; and all the religious, social, cultural and political organisations that they all get involved in the cause of progress and prosperity of this holy and divine cause of total welfare of entire mankind and that of our sacred Akhand Matru-Bhumi and great Hindu Rashtra forsaking all the prejudices and petty selfishness.

All the political parties were requested to take required steps to honour the self-identity and faith of Bharatiyas for the construction of Shriram Janmabhumi Mandir by rising above their vested political interests. Besides, the Govt. of Bharat was requested that it should ensure all necessary and required arrangements, so that the entire Shriram Janmabhumi premises including the place, where the Lord Shriram Lalla is ensconced now, to Shriram Janmabhumi Nyas. If it does not happen, then —

* Dharanas and protests would be organised in every city and Prakhand of the country on 27 Feb ruary 2003 (Thursday) to revive the agonising memories from the time of demolition of Shriram Janmabhumi Mandir by Babar till the martyrdom by burning the Ram-Sewaks at Godhra as part of a conspiracy on 27 February 2002, and the truth about all those anti-Mandir personages would be thrown open before the public.

* As far as the obstacles in the way of Mandir construction at Shriram Janmabhumi is concerned, a nation-wide public campaign would be intensified by the Dharmacharyas against the indifference and inaction by the Central Govt.

The Sant-Mahatmas present in the Dharma Sansad insisted the Central Govt. to immediately implement all the recommendations of National Gau-Raksha Commission in toto. Cow should be declared as the National Animal of Bharat taking the cattle to be the national property. A separate Ministry be set up at the Centre for Cow Protection and constitute a Gau-Sewa Commission with a budgetary support of a minimum of Rs.500/- crores. Besides, Cow-killing be declared as a non-bailable cognizible crime with the penalty of life imprisonment and/of death should be provided for. All the mechanised slaughter houses be shut down. A self-reliant economy may be re- established with its all-encompassing welfare and wellbeing by giving utmost importance to the Gau-products based on the Panch-Gavyas and bio-agriculture.

Dharma Sansad warned Govt. of Bharat that entire Hindu world is outraged by the conspiracy to finish off Ganga Mata by building impracticable massive dam at Tihri. One can not even imagine the existence of Bharat without Ganga. Hence an announcement may be immediately made on war footing to restore the pristine format of Ganga Mata and implement the same speedily.

Dharma Sansad appealed the Central Govt. to manifest its firm will power to crush the terrorism. It must ban the Madarasas, which have been the breeding grounds of terrorism. Dar-ul-Ulum of Deoband, Tablig, Ahal-e-Hadis, Dawat-e-Islam etc. should be banned and death penalty be provided against Jihad in the law of the land. Apart from this, the terrorist training camps in Pakistan and Bangladesh be smashed by applying POTA in Kashmir.

While expressing its deep concern over the problem of infiltration from Bangladesh to the tune of 3 crores, the Dharma Sansad said that enemies of Mother Bharati have no right to mercy of any type. While there is a need to identify them and deport them out immediately; circumstances also should be simultaneously created so that no infiltrator comes inside Bharat any more. Besides, a time-bound programme should be declared to deport all the Bangladeshi infiltrators. West Bengal govt. should be dismissed; IMDT applicable in Assam may be abrogated. Effort should be made to stop the atrocities perpetrated on the Hindus living in Bangladesh and Pakistan.

Dharma Sansad insisted Central and State Govts. to declare conversion to be serious crime by passing a law after taking into account the findings of Niyogi Commission, Rege Commission and Venugopal Committee.